The auction house in Vienna in the heart of Europe

TIBERIUS-AUCTIONS is the online auction house in Vienna. Only a stone's throw away from the imperial palace Schönbrunn, you will find a rich selection of artworks and antiques from all eras of history in an upscale ambience. Quality before quantity is our credo. Several times a year art auctions take place in our auction house. Our offer ranges from paintings of the Old Masters, the 19th century and the great painters of Classical Modernism to renowned contemporaries. Sculptures from antiquity, Gothic and Renaissance to the sculptors of the 19th & 20th centuries, exquisite antiques & Kunstkammer objects complete our diverse offer.

We ask for advance notification by telephone or in writing.

Not many international auction houses are able to sell a painting by the most famous baroque painter in the world. Tiberius-Auctions has succeeded in acquiring a work by Peter Paul Rubens (Siegen 1577 - 1640 Antwerp), which was believed to be lost, for the auction on July 5/6, 2022. The work, originally owned by the Russian tsar's family, came into the collection of Seehof Castle near Bamberg in Bavaria through a marriage. The motif of the boy Jesus with the young John and the sheep is perhaps the most famous motif of the painter. The artistic quality and the exceptionally good state of preservation underline the importance of the painting as an important rediscovery on the global art market.

In addition to Rubens, there are other works of art worth mentioning in the auction on July 5/6, such as the two woodcuts by Albrecht Dürer, the contemporary portrait of the Baroque composer George Frideric Handel, circa 1740 or the portrait of the Bavarian Elector Max Emanual in a suit of armor which was created shortly before 1700. Paintings by the 19th century Austrian artists Ferdinand Georg Waldmüller (1793-1865) and Friedrich Gauermann (1807-1862), the Viennese Art Nouveau painters Otto Friedrich or Ernst Stöhr are also up for bid, as is a watercolor by George Braque (1882-1963) or a wash pen drawing by Fernand Leger (1881-1955). In total, more than 200 paintings will be up for bid.

Also in the field of antiques, furnishings, art nouveau and jewelry we offer a variety of exceptional objects. Sculptures from the Middle Ages to the beginning of the 20th century attract the prospective buyer as well as a chandelier from the workshop of Josef Danhauser, works of the Wiener Werkstätte or Michael Powolny, silver utility and ornamental objects and fine arm watches from the house of Patek Phillipe or Rolex.

Of the post sale of the 6th Tiberius Auction 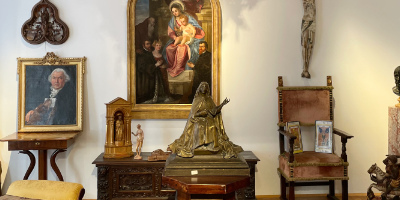 Several times a year TIBERIUS-AUCTIONS holds art auctions.
The selective choice at our "Art, Antiques, & Design Auctions" gives you the opportunity to buy high-quality objects from a wide range of offers.

At the "No Limit Auctions" you can bid on interesting & curious items at low call prices.

To make sure you don't miss an event, sign up for our newsletter to receive timely information about upcoming auctions. 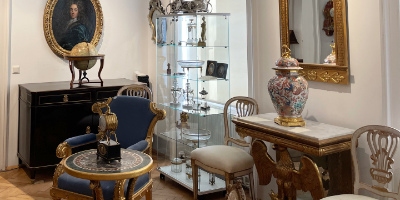 Our experts convince with their long experience and extensive knowledge in dealing with art and antiques. TIBERIUS-AUCTIONS auctions objects from antiquity to modern design. Medieval art, Old Master and 19th century paintings, Modern classics to contemporaries, sculptures of all periods and antiques from all parts of the world are our areas of expertise. 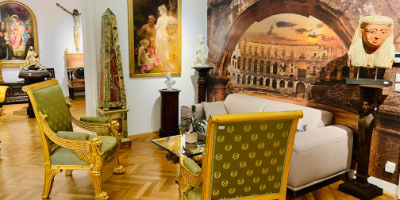 Through several generations of experience in the national and international art trade and the associated expertise, we can accurately assess and value each work of art. Our worldwide contacts to museums, large collections and a multitude of public institutions give you the certainty to always achieve the best possible sales price for your artwork at TIBERIUS-AUCTIONS.

Subscribe to our newsletter to be informed about upcoming auctions.

New from the 5th Tiberius Auction is that from now on you can pay with cryptocurrencies conveniently and easily with Kryptopay.

With this purchase order, I authorize TIBERIUS AUCTIONS to bid in my name and on my account up to the specified purchase limits or to contact me for a telephone bid during the auction.